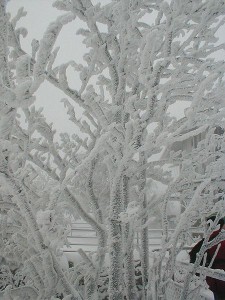 Hard rime is a type of white ice that forms when water droplets found in fog freeze to the outer surfaces of objects. Hard rime is most often found on trees atop mountains and high ridges in winter, when low clouds cause freezing fog. This fog freezes along the windward (sides facing the wind) side of trees, buildings, and any other solid objects. The air temperature needed for hard rime to form is less than 29 degrees Fahrenheit and typically higher than 17 degrees Fahrenheit. High wind is usually an accompaniment to the forming of hard rime.

In some extreme regions such as Mount Washington in New Hampshire, scientists at the meteorological center located there have to break off huge chunks of hard rime from the weather equipment, in order to keep the instruments operating. Rime ice sometimes accumulates on the leading edges of aircraft when flying through certain weather systems and conditions. The crash of Continental Connection Flight 3407 on February 12, 2009 was thought to be caused by the formation of hard rime build up on the control surface.

In some atmospheric conditions, descending snow crystals may pass through super cooled cloud droplets that exist in an unfrozen state to -40 degrees Fahrenheit. Contact between the snow crystals and the cloud droplets results in freezing of the liquid droplets onto the surface of the crystals. This process is known as accretion. These crystals that have frozen droplets on their surfaces are referred to as rimed. If this process continues to the point that the original snow crystal is no longer identifiable, the crystal becomes known as graupel. This graupel can become five times greater in mass than the original snow crystal. As the riming process continues, the identity of the snow crystal becomes increasingly obscure.