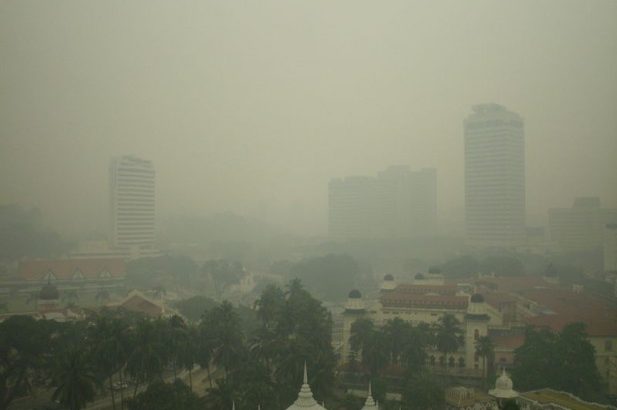 Haze is a type of atmospheric phenomenon where dust, smoke and dry particles in the air obscure the sky’s clarity. Haze is created through various activities including farming, traffic pollution,and even wildfires. The World Meteorological Organization (WMO) categorizes the obscuration of the Earth’s atmosphere by a list of different types of atmospheric phenomena. One of these is haze. The other classifications are: fog, ice fog, steam fog, mist, smoke, volcanic ash, dust, sand, and snow.

When seen from afar, and depending upon the direction of view, haze has a brownish or bluish tint. Although haze is mostly a dry air phenomenon, particles in the haze may create condensation that may cause the subsequent formation of mist droplets. This phenomenon is known as wet haze. Sometimes haze is referred to as visibility-reducing aerosols of the wet type. This term is used mostly in meteorology in the United States. The process of aerosol creation occurs due to complex chemical reactions from sulfur dioxide gases emitted during combustion which are converted into small droplets of sulfuric acid. Sunlight, high humidity, and stagnant airflow may enhance this process. Some components of wet haze are derived from compounds released from trees.

Wet haze is mostly a warm weather phenomenon. Large areas of haze that cover thousands of square miles may be produced in favorable summer conditions. Haze most often occurs when dust and smoke particles accumulate in relatively dry air. When certain weather conditions block the dispersal of smoke and other pollutants it usually creates a low-hanging cloud-like blanket that impairs visibility. Haze from industrial pollution is known as smog. Haze and smog can become a serious respiratory health threat. Since 1991, haze has been an acute problem in Southeast Asia. Haze is also used to describe the turbidity (cloudiness) in clear glass or plastic, or even the turbidity in beer or wine.

Haze causes issues in terrestrial photography. The filtering of large quantities of dense atmosphere is sometimes necessary to make accurate detailed images of distant objects. Light scattering from haze particles can cause a visual disturbance in contrast of the subject. Many telephoto lenses are coated with yellow filters to enhance image distortion and contrast when filming in hazy conditions. On hazy days, sunrise and sunset colors appear subdued, and stars may become obscured at night. In some cases, the effects of haze can be so great that, toward sunset, the sun disappears altogether before reaching the horizon.