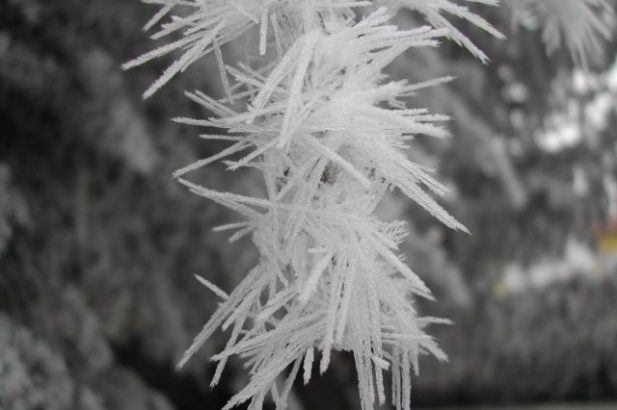 Soft rime is a type of milky white ice that forms when water droplets in light freezing fog freeze to the outer surfaces of objects. This formation usually occurs with light winds or in calm conditions. The rime forms to the windward (side facing the wind) side of solid objects. Soft rime is similar in appearance to hoar frost, but is formed differently. Soft rime is formed when vapor first condenses to liquid droplets and then attaches to the surface. Hoar frost is formed when water vapor is directly deposited onto solid ice.

Soft rime has the appearance of ice needles or scales. It is a milky white color. Soft rime can be easily shaken off branches or other objects. Favorable conditions for the formation of soft rime includes small droplet size, slow accumulation of liquid water, high rate of super-cooling, and rapid heat loss.