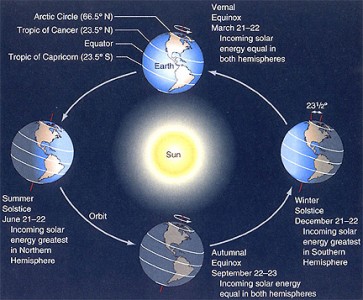 The Summer Solstice, or “Midsummer,” derived from the Latin sol (sun) and sistere (to stand still), occurs exactly when the Earth’s axial tilt is most inclined towards the sun at its maximum of 23Ã‚Â° 26′. This is the time when the Sun is at its highest, or most northerly, point in the sky in the Northern Hemisphere.

North of the Tropic of Cancer and south of the Tropic of Capricorn the Sun reaches its highest position in the sky on the day of the summer solstice. However, between both Tropics, the highest sun position does not occur at the Summer solstice, since the Sun reaches the zenith here and it does so at different times of the year depending on the latitude of the observer. Depending on the shift of the calendar, the Summer solstice occurs some time between June 20 and June 21 in the Northern Hemisphere, and December 21 and December 22 in the Southern Hemisphere.

It is not actually the Sun that moves North or South over the seasons, however, although it may appear that way. It is actually Earth’s axial tilt that causes the Sun to change position in the sky as the Earth orbit’s the Sun throughout the year.

Interpretation of the solstice has varied throughout cultures, but most have held a recognition of sign of the fertility, involving holidays, festivals, gatherings, rituals and other celebrations around the time of the solstice.

In Northern Europe the Summer solstice is most famously associated with Stonehenge, where the Sun has been worshipped for thousands of years.