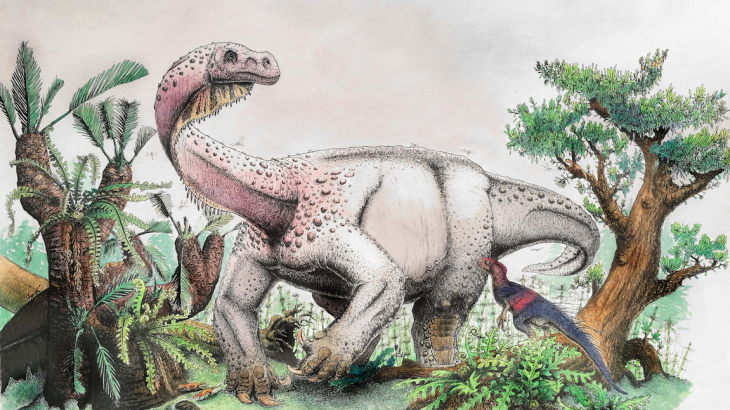 A new species of dinosaur, described from fossils found in South Africa, sheds light on the earliest dinosaurs from the Jurassic period during the Mesozoic era.

Researchers from the University of Witwatersrand in Johannesburg, South Africa discuss the new species in a study published in the journal Current Biology.

First discovered in 2012, the dinosaur was described as belonging to a new species of sauropodomorphs named Ledumahadi mafube, and it’s a close relative of the famous long-necked sauropod Brontosaurus.

What’s notable about the Ledumahadi mafube is that it provides paleontology with a rare glimpse of dinosaur evolution and how the early ancestors of sauropods developed the ability to walk on all fours.

After years of excavating the skeleton, the researchers realized that the specimen was a full grown adult around 14 years of age and estimated that it weighed around 12,000 kilograms.

“It shows us that even as far back as 200 million years ago, these animals had already become the largest vertebrates to ever walk the Earth,” said  Jonah Choiniere, one of the researchers involved in the excavation of the specimen.

The researchers weren’t sure if the dinosaur they uncovered walked on two legs like earlier dinosaurs or was a quadruped like the brontosaur. To find out, the researchers measured the thickness of the Ledumahadi’s limbs and used that to estimate how much weight the dinosaur carried and how that weight was dispersed when walking.

It turns out that the dinosaur likely waked on all fours. The researchers also discovered that other sauropodomorph dinosaurs were probably “experimenting” with walking on all fours, eventually leading to the complex evolution of quadruped sauropods.

“The evolution of sauropods isn’t quite as straightforward as we once thought,” said Choiniere. “In fact, it appears that sauropodomorphs evolved four-legged postures at least twice before they gained the ability to walk with upright limbs, which undoubtedly helped make them so successful in an evolutionary sense.”

The findings also point to an abundant and diverse dinosaur ecosystem in South Africa with many huge carnivores.

“There was a thriving dinosaur ecosystem here in South Africa, at the bottom of the world, featuring 12-ton giants like Ledumahadi, tiny carnivores like Megapnosaurus, the earliest mammals, some of the earliest turtles, and many, many others,” said Choiniere. “Africa, and particularly South Africa, is known for its big game. I think we should be just as famous for our big game of the early Mesozoic, 200 million years ago.”

In a new study from the American Institute of Physics,...

Babies exposed to air pollution have impaired breathing by childhood

Babies exposed to air pollution have poorer lung function as...

Tropical plant has a single leaf with unlimited growth potential

In Southeast Asia, bizarre plants grow along the walls of...

There is no safe level of caffeine for pregnant women

Expectant and hopeful mothers should completely avoid caffeine, according to...

Soil erosion will accelerate in the next few decades as...

Hydrogen vehicles will soon be less expensive and much more realistic

In a groundbreaking new study, researchers at the University of...

In a new study from the University of Arkansas, scientists...

The COVID-19 pandemic is shedding new light on the widespread...

Waterbirds are being forced out of the tropics by climate change

Some experts theorize that in the past, climate change promoted...

A new study from Hokkaido University suggests that rising ocean...

Yoga can improve the quality of life for individuals suffering...

How did COVID-19 spread so extensively in the United States?

The United States has now reported well over five million...