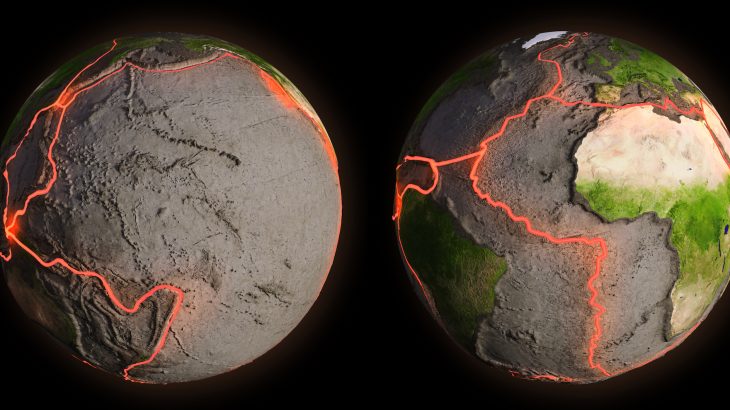 A new study from the University of Tennessee at Knoxville suggests that plate tectonics could have been active from Earth’s very first days. The findings contradict the theory that tectonic plates were developed over the course of billions of years.

Plate tectonics is a scientific theory that explains how the structure of the Earth’s crust was formed by large chunks that move slowly over the hot mantle rock below.

Study co-author Nick Dygert is an assistant professor of Petrology and Geochemistry in UT’s Department of Earth and Planetary Sciences.

“Plate tectonics set up the conditions for life,” said Professor Dygert. “The more we know about ancient plate tectonics, the better we can understand how Earth got to be the way it is now.”

The investigation was focused on the distribution of two very specific noble gas isotopes, Helium-3 and Neon-22.

Previous studies have determined that the Earth’s current ratio of these two isotopes could be explained by a series of large-scale impacts. The result would have been massive magma oceans, which increased the ratio of the gases with each impact.

However, Professor Dygert believes this scenario is unlikely. “While there is no conclusive evidence that this didn’t happen, it could have only raised the Earth’s Helium-3/Neon-22 ratio under very specific conditions.”

Professor Dygert and his team believe that the Helium-3/Neon-22 ratio was boosted by active plate tectonics. As the Earth’s crust is continuously formed, the ratio of helium to neon in the mantle beneath the crust is driven up.

According to the researchers. a rough timeline of Earth’s tectonic plate cycling can be established by calculating the Helium-3/Neon-22 ratio in the mantle beneath the crust, and by accounting for how this process would affect the bulk of Earth over long periods of time.

“Helium-3 and Neon-22 were produced during the formation of the solar system and not by other means,” said Professor Dygert. “As such, they provide valuable insight into Earth’s earliest conditions and subsequent geologic activity.”

The study is published in the journal Earth and Planetary Science Letters.