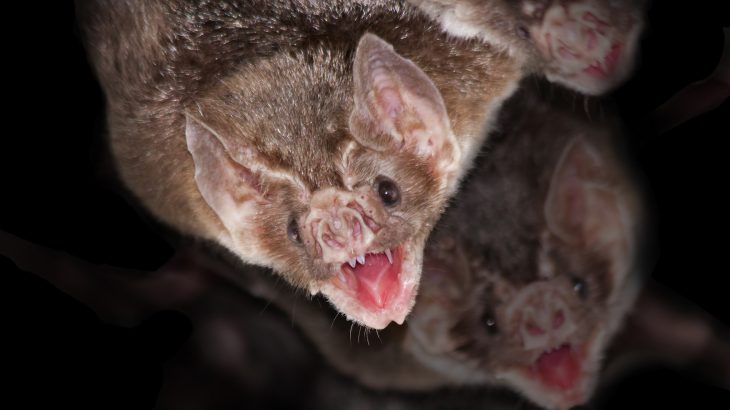 Vampire bats carry bacteria that cause deadly infections in humans

A new study has found that many vampire bats are carriers of Bartonella bacteria, and Bartonella infections are extremely prevalent among bat populations in Peru and Belize.

Bartonella bacteria can cause life-threatening diseases in humans and animals such as endocarditis, which is an infection of the lining of the heart.

Vampire bats are common carriers and because Bartonella bacteria is zoonotic, meaning it can be transmitted from animals to humans, and this increases the risk of transmission and disease for humans and livestock.

Researchers from the Montana State University set out to examine how much vampire bats themselves were at risk of infection, rather than focusing on their role as carriers as many other studies have.

Although vampire bats are considered an abundant zoonotic reservoir of Bartonella infections in humans, how bats contract and spread the disease amongst themselves is not well known.

The results of the study were published in the journal PLOS Neglected Tropical Diseases.

Over a period of two years, the researchers collected blood, saliva, and fecal samples from vampire bats in both Belize and Peru.

The different samples were analyzed and the researchers were able to identify which bats were infected with Bartonella bacteria.

To determine the individual risk factors for Vampire bats, the researchers studied the relationship between age, sex, forearm size, and the reproductive status of the bats.

If a sample did test positive for Bartonella, the researchers conducted genome sequencing and phylogenetic analysis to better understand how and where the disease spread from bat to bat.

Male vampire bats carried the highest risk of infection and 67 percent of the samples tested positive for the bacteria.

The genotypes of the bacteria showed a wide distribution across Central and South America.

Bats, like humans and animals, can become infected with Bartonella through arthropod bites like ticks or mites that use hosts for a blood meal. However, the researchers also found that vampire bats could spread the disease to other bats through saliva or environmental contamination.

Having a better understanding of how vampire bats contract Bartonella could help with creating better strategies to prevent disease transmission.

“Given the high rates of vampire bat bites and proximity to humans, and domestic animals, such efforts to verify the possibility and frequency of oral and environmental exposures would elucidate Bartonella transmission dynamics in this common host species and the risks of cross-species transmission,” the study authors wrote.

In a new study from the American Institute of Physics,...

Babies exposed to air pollution have impaired breathing by childhood

Babies exposed to air pollution have poorer lung function as...

Tropical plant has a single leaf with unlimited growth potential

In Southeast Asia, bizarre plants grow along the walls of...

There is no safe level of caffeine for pregnant women

Expectant and hopeful mothers should completely avoid caffeine, according to...

Soil erosion will accelerate in the next few decades as...

Hydrogen vehicles will soon be less expensive and much more realistic

In a groundbreaking new study, researchers at the University of...

In a new study from the University of Arkansas, scientists...

The COVID-19 pandemic is shedding new light on the widespread...

Waterbirds are being forced out of the tropics by climate change

Some experts theorize that in the past, climate change promoted...

A new study from Hokkaido University suggests that rising ocean...

Yoga can improve the quality of life for individuals suffering...

How did COVID-19 spread so extensively in the United States?

The United States has now reported well over five million...