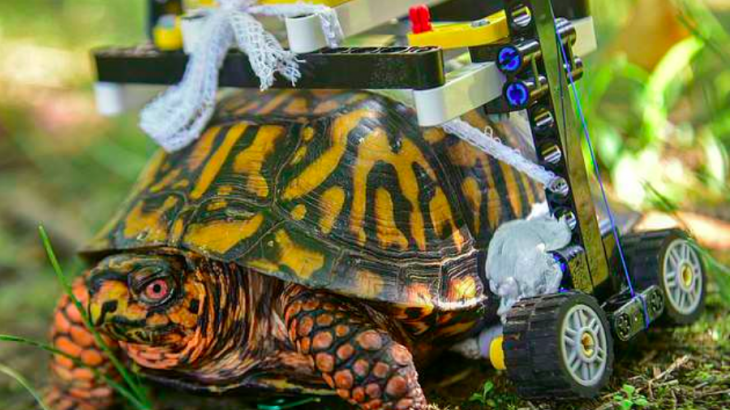 At The Maryland Zoo, a turtle is rolling around on a wheelchair made out of Legos while recovering from surgery. The wild Eastern box turtle was found in July with injuries and was taken to the zoo’s hospital.

Dr. Ellen Bronson is the senior director of Animal Health, Conservation, and Research at The Maryland Zoo.

She explained in a news release: “He had multiple fractures on his plastron, the bottom part of his shell. Because of the unique placement of the fractures, we faced a difficult challenge with maintaining the turtle’s mobility while allowing him to heal properly.”

The veterinary team performed surgery to save the turtle’s fractured shell, which is now held together with metal bone plates, sewing clasps, and surgical wire.

Garrett Fraess is a fourth year veterinary student who works at The Maryland Zoo.

“It was important to keep the bottom of the shell off the ground so it could heal properly,” said Fraess. “They don’t make turtle-sized wheelchairs. So, we drew some sketches of a customized wheelchair and I sent them to a friend who is a LEGO® enthusiast.”

A few weeks after the surgery, the turtle received his custom-made wheelchair. The frame built out of Legos surrounds the turtle’s shell and rests on four Lego wheels.

The device was attached to the upper shell with plumbers putty, which lifts the turtle up enough to free his legs for movement. According to Fraess, the turtle took to his new wheelchair right away.

“He never even hesitated,” said Fraess. “He took off and has been doing great. Turtles are really good at healing as long as the shell remains stable.”

The turtle uses his front legs to wheel around, and the wheelchair design allows for natural movement. The turtle can even fully close his shell if he feels threatened.

“Turtles heal much slower than mammals and birds, since their metabolism is slower,” said Dr. Bronson. “So, this turtle will likely use his LEGO® wheelchair through the winter and into the spring until all of the fragments have fused together and the shell has completely healed.”

“This particular turtle was originally tagged in 2000, making him at least 18-years-old,” said Dr. Bronson. “We are very happy that he is recovering well from his injuries and we plan to return him to the wild once he is fully healed.”